A downloadable game for Windows

It takes place in an evocative, lore-filled dark fantasy world, taking inspiration from games such as Ultima Ratio Regum, Dwarf Fortress, Overlord, the tabletop game Silent Legions, and the works of H.P. Lovecraft.

It is written in c++ with help from libtcod and is  still in development!

The focus of the game is on procedural mechanics and providing procedural exposition to go with it. Almost every class has it's own win condition, and also there are more complex faction dynamics at play.

Project Roadmap and screenshots can be found here

You can talk about the game and suggest features on my discord!

Also please check out my other games! Such as DR4X!

(Icon by Blingley From the Roguelike discord, thank you so much for that wonderful art)

Check out my other game DR4X!

An awesome roguelike with tons of potential, alot of it having been fulfilled already! Though I know there's alot more to look forward to in the future, as seen by your road map. I just have one question, since I cannot seem to find any guides online whatsoever... What purpose do strange circles serve? I found a rune that allows you to make them? I'm not sure how they work...

You can find ritual notes randomly. The Strange CIrcles are used for these 'rituals'. A basic one is pushing a crate onto a strange circle and breaking it...something will happen when you do that. There are many of these 'rituals'.

Understood! Thanks. That is a neat feature!

here is a great review a youtuber named Painticus made a few versions back:

Picked this up because I enjoy a good dark fantasy and wanted to see how the game plays out. Good luck with development!

Played for a bit. Never really got into traditional roguelikes before, but the flavor in this one is strong and immersive.

Definitely worth trying out if you like exploring new concepts or have an interest in anything Lovecraft!

Hi! I am contacting creators/developers on behalf of a graduate researcher studying how Lovecraft is represented in games. If you have time to complete a 10-minute survey about Roguelegends, please send a message to: masonsmith [at] tamu [dot] edu.

Already received 2 emails about this for my other games. Will do if i have time. Pretty cool to help a study.

Roguelegends: Dark Realms is an ASCII Rogue-Like set in a Dark Fantasy/Cosmic Horror world, where in one year. Life will cease to exist... Your job is to prevent that from happening (or dying) while uncovering the shocking origin of the elemental magic of the world...

We have our normal array of fantasy races. A nice variety of classes to choose from—some are original. Like the Librarian. Each with different stats and starting runes. Depending on your class there will be a sub-plot. Why am I here in this horrible nightmare?

Potions to drink (don't drink flame or poison) and throw. Said throwing potions (and other items as well) at an enemy caused an area of effect. RLDR is encouraging players to exploit the weakness of the denizens in the Dark Realm. Frontal assault usually ends in death, as I learned the hard way. Combat isn't necessary as there is no level system in place to become stronger—only through equipment. 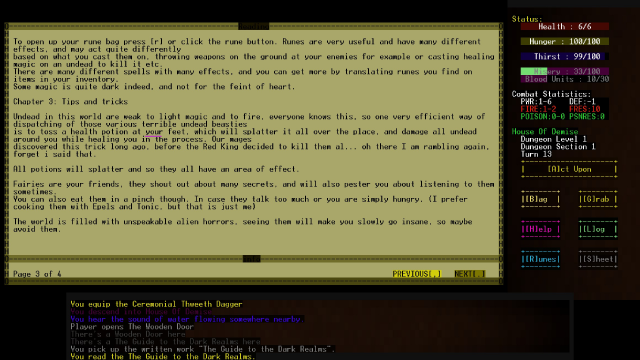 There are, however, some minor issues; like the clarity of the text—purple on black is hard to see and some grammatical errors (nothing mind blowing). When I spoke with (well he was talking and I listened) the developer about his mythos. He has mentioned possible fixes to blaring areas.

There is a Rune (or magic) System for abilities at the cost of hunger or blood [X (Y + distance {per square})]. Insomuch nothing is entirely unique about the system. However, since there is no leveling system in place, most runes are found from inspecting runes on an equipment. But it isn't guaranteed to get a new rune-spell. It is an imaginative take on the old trope.

No two play sessions are the same, thanks to the procedurally generated nature of the game. Although, I got screwed over with the beating heart and a dungeon with no flame potions anywhere. It happens in a game like RLDR. Just weren't in the cards. 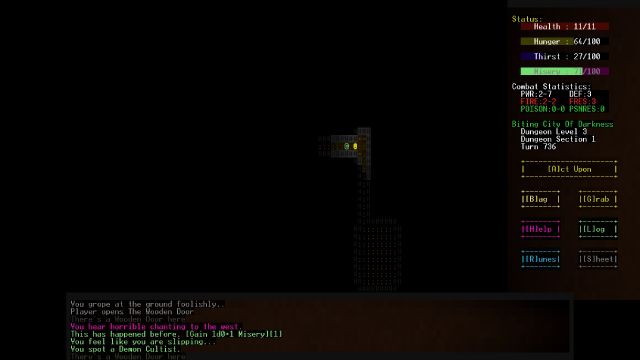 The mythos, Dark Realms has attracted my attention throughout this hostile land. As I dive deeper into the game and witness the monstrosities that any sane mortal would die from their appearances, you gain misery. On the subject: Misery is the game, the sanity mechanic, the effects, the random chance of a hostile swift in the area, either that is the summoning realmlings (bastards), the shadows and fleshy maws or worse singers... and the dancers...

While the game is not finished, there is plenty of content to look forward to, as I still find surprises at every corner in these blackened halls, or shadowy woods. The developer demonstrated some original ideas in the old vein of Rogue-Likes and to me, a birth of a new mythos. As they continue to develop more games in this startup mythos looking for eager cultists.

~For others to see.~

Thanks for the cool review!

This game is amazing you should be proud of this amazing creation!

Really nice rogue-like. The random enemies really add to it.

Dont be afraid to give feedback! I want lots of feedback :)

A great lets player named Everyonelovespirates also played it (Though his play through is 0.1.80 )

I had alot of fun playing this game and I like tabletop games, so this got an extra point for me. I really wanna see this continue.

Thanks for playing it! I appreciate that.  Though it looks like you didn't get the controls very well, im glad you enjoyed it. (Perhaps i need to make them clearer :P).

It's refreshing to play a classic rogue-like game. Here you get the ASCII-like graphics, and you also get the different ways to control the character on each turn and slight humour in the log messages. The enemies I encountered were actually surprisingly easy for what I expected, but then again it's good that you can explore without having to fret too much. I wonder if there's a way to change the size of the window, now it was very low by default.

I'd like to invite this game to take part in our game-making contest!

Can i have more details about this contest?

Reply
The GDWC4 years ago

It's a yearly contest open for all independent developers and their games released in this year. You can register and enter here: www.thegdwc.com. A jury will pick winners in several categories after the entries close at the end of September. 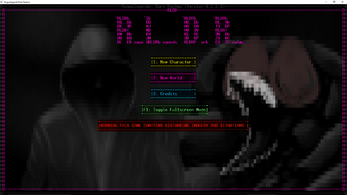 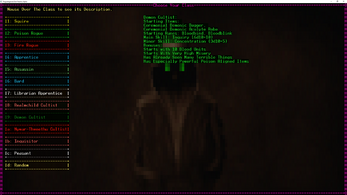 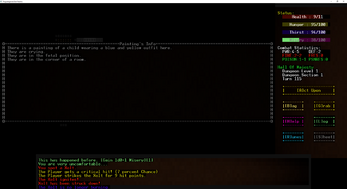 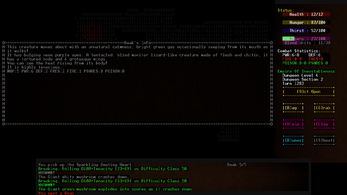 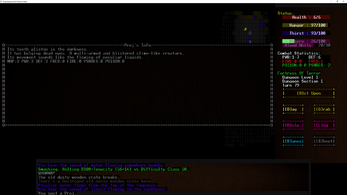 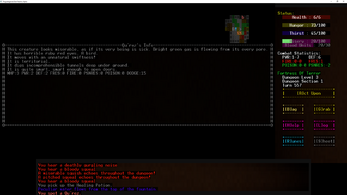 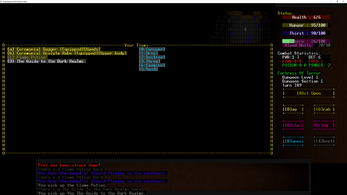 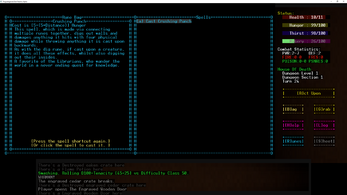 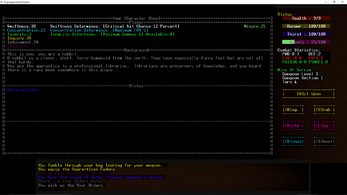